John Proctor as a Tragic Hero in The Crucible

In the play by Arthur Miller The Crucible, the town of Salem is in pandemonium under the non-existent threat of witchcraft. Every character is either lying to save their lives or to end others, or dying for not admitting to a lie. One character who stands out among the chaotic conflagration is the tragic hero John Proctor. In Greek drama, a tragic hero is defined as “a great or virtuous character in a dramatic tragedy that is destined for downfall, suffering, or defeat”. 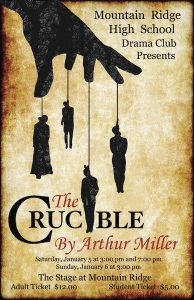 During the chaos of the trials, the supposedly moral and just citizens of Salem loses a moral compass. What sets John Proctor apart is the fact that he is willing to do what is good, despite the personal cost. As he is trying to save the life of his wife, as well as himself, he addresses Judge Danforth.

“She thinks to dance with me on my wife’s grave! And well she might, for I thought of her softly. God help me, I lusted, and there is a promise in such sweat. But it is a whore’s vengeance, and you must see it; I set myself entirely in your hands. I know you must see it now” (Miller 49, John Proctor Essay) Here, John Proctor reveals Abigail’s true motivations, and at a great personal cost. In the Puritan culture, one’s image was one’s livelihood, and Proctor gives his up to maintain truth and stability.

Another trait that adds to the nobility of John Proctor is his voice of reason in a reasonless situation. The first person he voices this to is Reverend Hale. “And why not, if they must hang for denyin’ it? There are them that will swear to anything before they’ll hang; have you naught thought of that” (Miller 33.)

John is somehow the only one in the community to see that people might confess to what they did not do so they will not hang. Arthur Miller also conveys through John Proctor that it is acceptable to stand up to unjust authority. These traits that the character John Proctor possesses are what qualify him to be a tragic hero.

A tragic hero must have tragic flaws as well, which John Proctor does not have a lack of. It is arguable that his affair with Abigail Williams is the root of the witch trials. He tries to fix it by attempting to silence her. “Abby, I may think of you softly from time to time. But I will cut off my hand before I’ll ever reach for you again. Wipe it out of mind. We never touched, Abby” (Miller 15.)

This affair he has with Abigail is an extremely deadly flaw. Abigail starts all of the witch paranoia because of her desire to get rid of Elizabeth Proctor because she falls in love with John. When John discharges her from his home and his life, she goes on a blood buzz for Elizabeth and the rest of Salem, causing the entire tragedy of the witch trials. A broader point that Miller depicts through the effect the affair has is all of the damage that lying and unfaithfulness causes.

Another tragic flaw that, like most tragic heroes in Greek drama, John Proctor exhibits is pride. Proctor has the choice between life and death on pen and paper, to sign his name means life, to refuse means death. “Because it is my name! Because I cannot have another in my life! Because I lie and sign myself to lies! Because I am not worth the dust on the feet of them who hang! How may I live without my name? I have given you my soul, leave my name” (Miller 62.)

The begging of John Proctor to preserve his name is as prideful as it is useless. He confesses to these lies, but he lets himself be hanged because he does not want the community to see his name on a confession paper on the church door. It is this exact flaw that leads directly to the downfall and death of John Proctor.

John Proctor fits perfectly to the definition of a tragic hero. He shows nobility through his traits such as sacrifice and reason. He also exhibits tragic flaws through his personal demons such as pride, lust, and unfaithfulness. Through the character John Proctor, Arthur Miller teaches the reader a valuable lesson. Unfaithfulness and pride will lead to downfall, and it is remarkable if you are a voice of morality and reason in an unjust situation.

What is John Proctors tragic flaw?

John Proctor’s biggest tragic mistake was honesty, because he could easily have saved his life by accepting a confession and signing that he was a witch. However, since he was excessively proud of his name and honesty, he did not sign the confession, which ultimately led to his death.

We will write a custom Essay on John Proctor as a Tragic Hero in The Crucible specifically for you for only $16.05 $13/page